Clan Mother Rachelle will come to the Human World Summit

We are very honored to introduce you to

CLAN MOTHER  RACHELLE FIGUEROA, in june she will be one of the 144 Earthkeepers

Her service has always been to extend her hand and heart in friendship with all people and help bring Unity, Peace and Balance back to Unci Maca, GrandMother Earth. 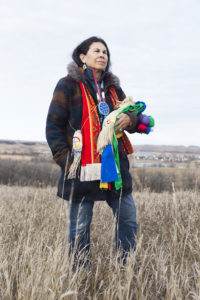 Clan Mother Rachelle Figueroa, 65, holds her pipe bag, which holds her sacred chanupa which has been passed down for 17 generations.

Clan Mother Rachelle Figueroa is the Grand Matriarch of the Choctaw-Muskogee-Yamassee Nation and is of Arapaho and Tarascan lineage. She is a Traditional Practitioner, Sundancer and Sweat Lodge facilitator of the Lakota Tradition. Her Lakota Spirit name is: Oyate Wi Ca Yu Wita Winyan; She Who Gathers the People on Turtle Island. Clan Mother Rachelle is the Founder and Executive Director of The Morning Star Foundation and is a member of  MSF’s International Council of Traditional GrandMothers and GrandFathers. Rachelle was born and raised in Los Angeles, California, where MSF has been based since 2002. In 2006 MSF began 4 years of International GrandMother Gatherings. At that time Clan Mother was first asked to bring together the Sacred Waters of Mother Earth, to help bring forward the prophesy of a new time of the Voice of the Feminine, for the healing of the Sacred Hoop of the Women Nation and Mother Earth.  Since then she has traveled to the 4 Directions of Mother Earth to bring the Sacred Waters to all Nations for Peace, Unity and Balance. In 2014, Clan Mother was asked to caretake the “Sacred Staff of Unity” from the Mayan Council of El Salvador, before it travelled to Japan. After one year in Japan, the Sacred Staff returned to Los Angeles, where Clan Mother Rachelle travelled with It throughout California, Turtle Island (USA) and India. After a year, the Sacred Staff returned to Her homeland of El Salvador. Clan Mother Rachelle is committed to be of service to all Indigenous/Native Nations, using Morning Star Foundation to support and protect Traditional Teachings, Sacred Ceremonies, Sacred Sites, all Sacred Waters and our blessed Mother Earth. Her service has always been to extend her hand and heart in friendship with all people and help bring Unity, Peace and Balance back to Unci Maca, GrandMother Earth.